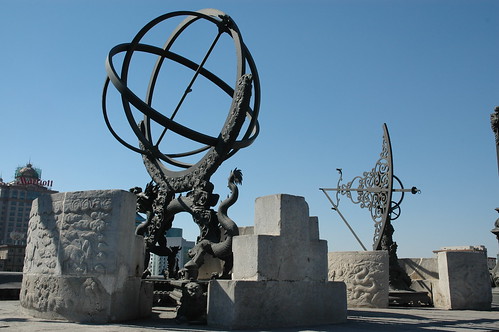 Beijing Ancient Observatory is one of the foremost tourist attractions in China. Regarded as a pretelescopic observatory, this historical site was founded during the Ming Dynasty in 1422 and has since then played an important part in Chinese history.
Considered one of the oldest of its kind, this ancient observatory boasts a long, rich history that extends to over five hundred years. Managed by the Beijing Astronomy Observatory, it is more commonly known today as the Beijing Ancient Astronomical Equipment Exhibition.
Sprawling across an area about 10,000 square meters, the Beijing Ancient Observatory is ideal for those who enjoy stargazing. Sited on a 15 meter tall brick platform is the observatory, which was utilized to observe the phenomena of the skies, whilst the exhibits can be seen on the ground level.
Acclaimed a one of the most historically interesting observatories in the world, the Ancient Observatory holds a number of revolutionary tools including sundials, armillary, spheres and bronze astronomical instruments. Dating from the Qing dynasty, these exhibits are a fascinating sight, a highlight being the bronze equipments, which make up a series of eight magnificent astronomical instruments. Placed on black-brick platform, these bronze instruments include horizon longitude equipment, equator theodolite, body equipment, quadrant equipment, celestial ecliptic theodolite, horizon theodolite, Jihenfuchen equipment made in Qing Dynasty and Simple Phenomena equipment. Exquisitely carved on the equipment body are vividly coloured flying dragons. Reflecting the influence of European Renaissance and Oriental craftsmanship, the design of the instruments represents the understanding of physics and measurements.
In addition, there are four exhibition rooms, namely the Shadow Observation House, The Ziwei Palace, the West Wing-room and the East Wing-room. Enlightening you on the plentiful calendars and significant calendar reforms in China is the West Wing-room, whilst the East Wing-room will showcase the construction of astronomical equipments. The display will also narrate the history of developments made at the site. For those wanting to witness the place where ancient astronomers used to determine behaviour of the sun shadow measure, the Shadow Observation House is the ideal place.
Ascott Raffles City Beijing is the ideal accommodation for the traveller in search of serviced apartments in Beijing. Guests staying in one of these serviced apartments Beijing will enjoy a host of modern amenities, coupled with exceptional service.