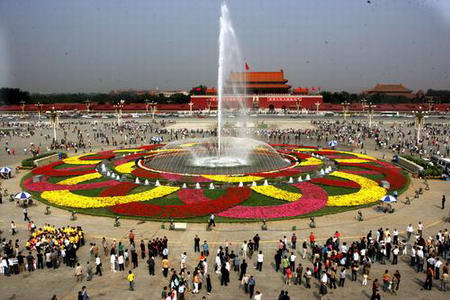 A sprawling open plaza located in the heart of Beijing, Tiananmen Square is a destination that offers travellers to the city much to explore. While the location has gained international recognition for being the site of the infamous Tiananmen Square Massacre, this scenic locale has been the focal point of numerous events in China’s long and proud history.

Tiananmen Square has the distinction of being the largest square in the world with a space of 440,000 square metres allowing it to hold up to 10,000,000 people at any given time according to estimates. Beyond just being a square, several points of architectural and historical interest are located here.

Situated at the centre of the square is the Monument to the People’s Heroes which is the biggest monument ever created in Chinese history. Consisting of an immense pillar that is set on a base, the memorial also features an epitaph by Mao Zedong (the founder of the People’s Republic of China) engraved on to its surface. The artefact also features eight large relief’s depicting important events in Chinese history.

Located on the east side is The National Museum of China which houses a staggering array of pictures, objects, books, and models, all of which serve to showcase the development of the Chinese nation in to what it is today. A significant collection of cultural relics is also stored here while the entire museum features items that date as far back to 1,700,000 years ago.

The revered Chairman Mao also has a monument in his honour at Tiananmen Square. The Memorial Hall of Chairman Mao features three halls, one of which has the body of Chairman Mao enshrined in a crystal coffin that is constantly surrounded by flowers and grasses.

The Great Hall of the People lies to the west of Tiananmen Square and is currently used for the convening of the China National People’s Congress as well as various other political and diplomatic meetings. The structure itself features lavish interiors spread across several rooms that can be leisurely explored.

The final attraction here is Tiananmen Tower which is an imposingly tall structure that historically served the important purpose as being the point from which the ascension of a new Emperor and Empress would be announced. During its heyday, only royalty could enter this structure but today it is open for all to explore.

During your travel to China, booking a Beijing hotel such as Grand Millennium Beijing presents an ideal accommodation option for a short or long term stay in the city. It is a highly prefferred option among Tiananmen Square hotels.