The magnificent White Dagoba Temple, also known as the Baita Temple is one of Beijing’s foremost religious landmarks. The temple is named after the imposing and splendid white dagoba which it contains.
Today the temple consists principally of the White Dagoba and four large halls which contain numerous meticulously crafted Buddhist themed statues, five Buddha crowns, Buddhist scriptures in the classical style, vibrantly colourful fabrics, cassocks with flowery decorations and other valuable objects. The most renowned of these artefacts is the gold Dagoba Longevity Statue which is of impressive proportions and ornamented with more than 40 rubies; as well as the bronze Bodhisattva Statue of Kwan-yin depicting one thousand eyes and hands. The temple also has the distinction of being reputedly the earliest place where the Buddhist scriptures were translated.

The White Dagoba rests on the northern side of the temple compound. It is the creation of Anigo, a renowned Nepalese architect who was also responsible for the design of Buddhist shrines in Mt. Wutai. The design of the White Dagoba is an inspired creation which resembles an ice cream cone turned upside-down. The dagoba’s base consists of three layers, whilst near its pinnacle a solid canopy may be seen. This structure is formed of beaten bronze on top and solid wood at the base, which is additionally supported with several sturdy iron chains. At the summit of the construction you will see an additional smaller stupa. There are also wind-chimes, which emit a clear and attractive note transmitted along the breeze. The borders of the stupa are ornamented with small Buddhist statues and characters creating a distinctive appearance.

The majestic structure has the distinction of being the largest and earliest Tibetan style dagoba in the Chinese capital. It stands as a testament to the magnificence of the region at the time of the Yuan Dynasty and the cordial relations which existed between Nepal and China. With its unique beauty and acclaimed cultural value, the White Dagoba Temple will leave a lasting impression in the minds of visitors as a site of spectacular design and construction.
The selective visitor looking for serviced apartments in Beijing will be pleased by the Ascott Raffles City Beijing, one of the outstanding serviced apartments Beijing offers. This fine rest provides excellent accommodations and impeccable service. 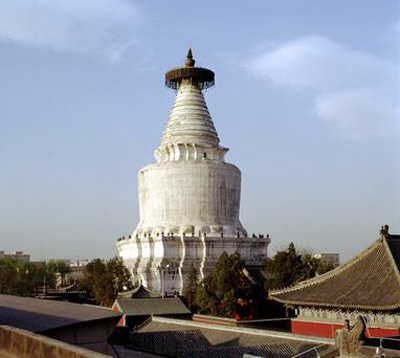 Featuring a white dagoba, the White Dagoba Temple is also known as the Miaoying Temple. It consists of the temple courtyard, Jvliu Shentong Hall, Qifo Hall, Yizhu Xinjing Hall and Tianwang Hall. Wooden carvings of Medicine Buddha, Amitabha and Sakyamuni are housed within the Jvliu Shentong Hall. The temple presents an exhibition of valuable cultural relics. Additionally, the temple is home to a colourful hada, a jewel studded cassock and an exquisite golden Buddha statue. A charming Beijing hotel catering to both business and leisure travellers is Grand Millennium Beijing. Located amidst prominent shopping venues and business centres, it is an outstanding city hotel Beijing.